Skylar & Plux: Adventure on Clover Island is a passionate homage to the 3D platformers of our youth. Go on an action packed adventure, collect gadgets helping you explore a beautiful paradise and save it from evil.

In this assignment the goal was to create a time trial level together with the guys from Right Nice Games and it had to be made for their game Skylar and Plux: Adventure on Clover Island. One of the most important things was to stay true to the game. This meant using their assets and during no circumstances deviate from the game’s vision. Beside this we were free to make our level as we wanted as long as it was a time trial. To separate myself from the classic approach when comes to time trials I decided to make a very open level which focused on exploration and finding different paths. But now, let’s get to it.

The goal in this level is to find four buttons which will open a door, letting Skylar and Plux escape their entrapment. There is one button in each area of the level: One in The Canyon, the other in The Old Temple and actually two buttons in The Oasis but more on that later. Every area has a different look to it, since it is a open level I wanted the player to easily see and understand where they are and by making each area look different I achieved that.

When making this level my main idea was to make a time trial level where the challenge isn’t necessarily to take the fastest path but to find the ultimate combination of paths to finish the level the quickest. Depending on which order the player gets to the buttons and what paths they take the time in which they finish the level will vary. The lines on the map represents the placement of each cable leading to the buttons, and taking one cable before the other will determine your finishing time. I wanted the player to come back, replay the level some more times until they have found the best path. 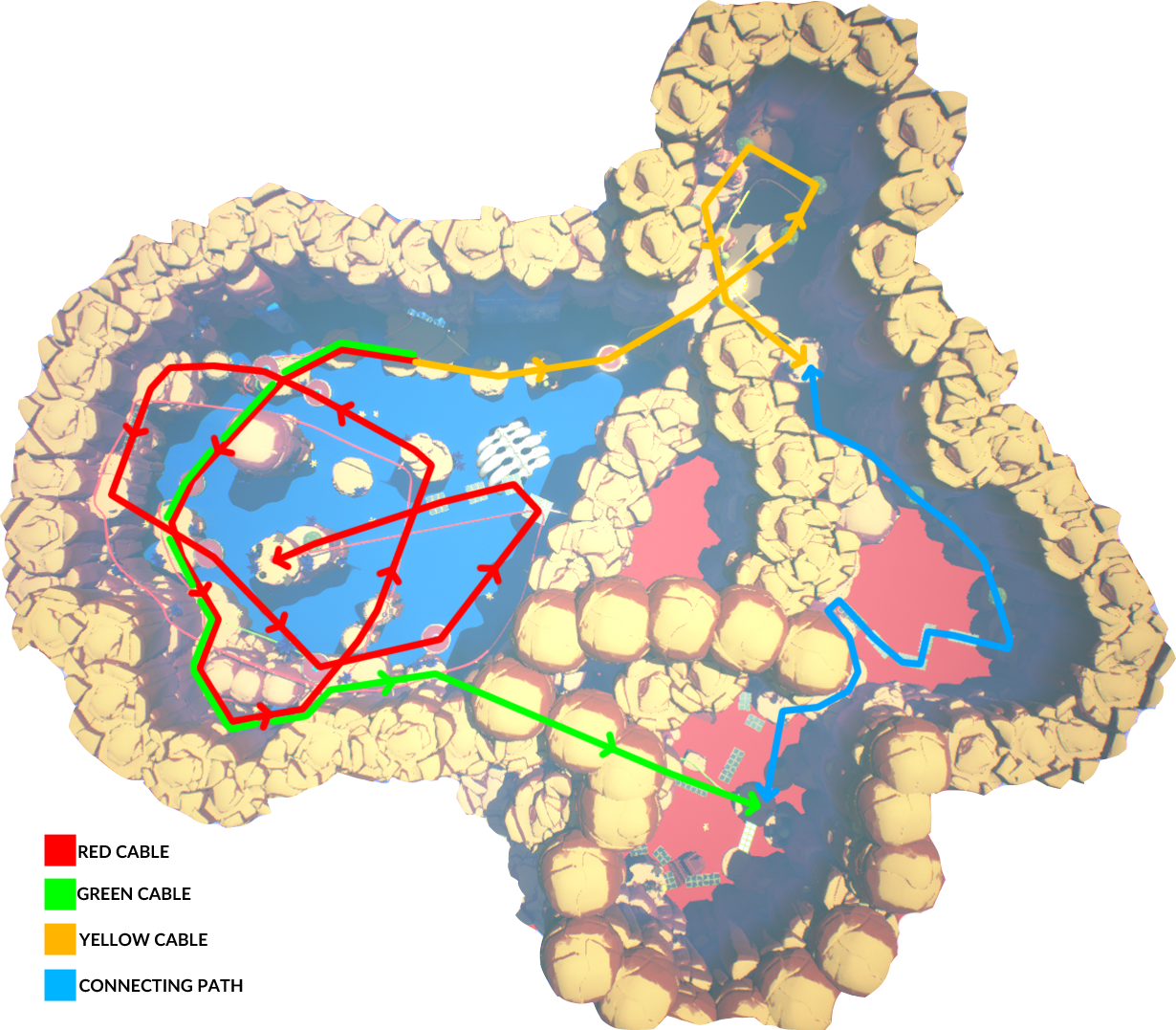 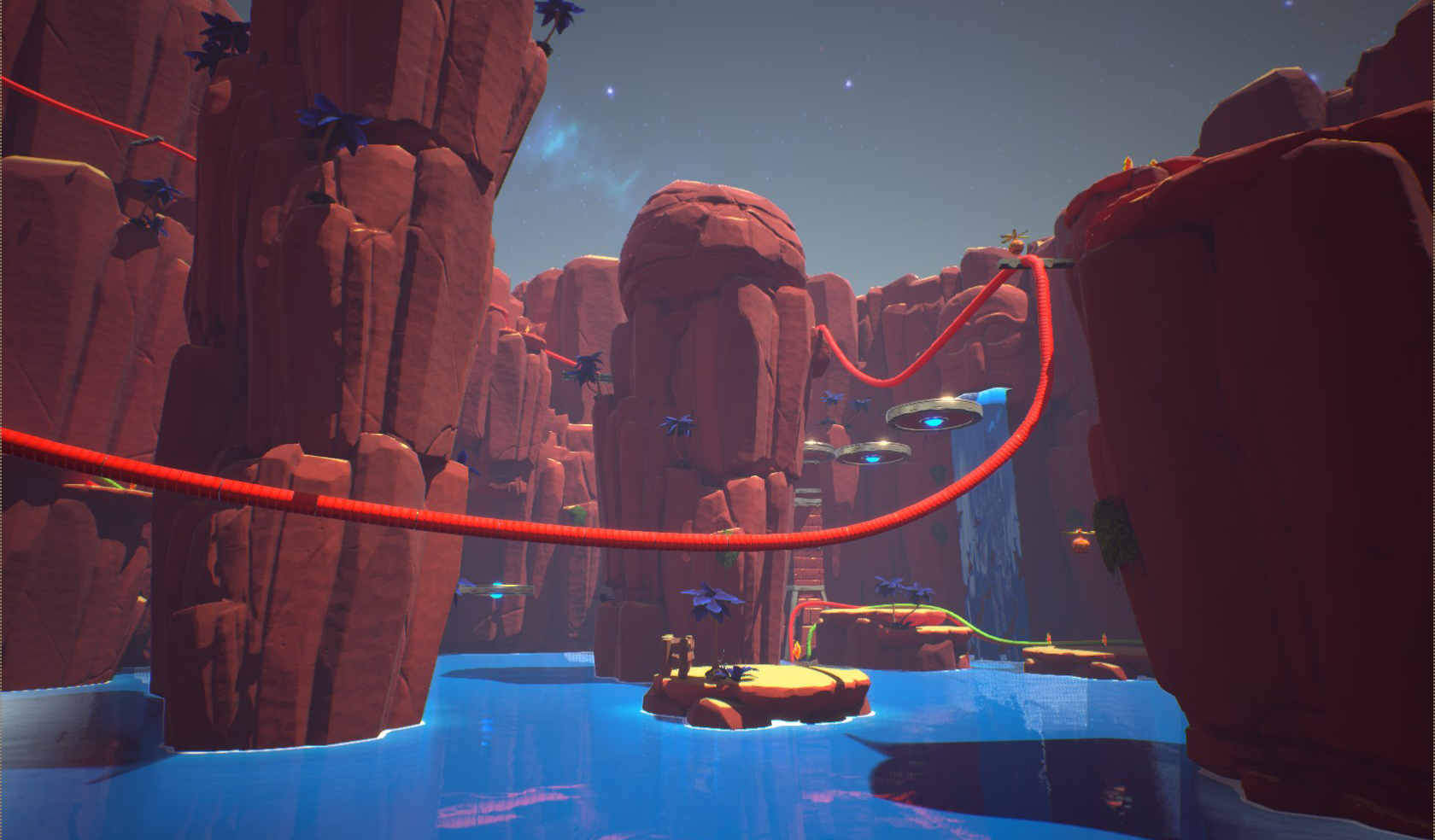 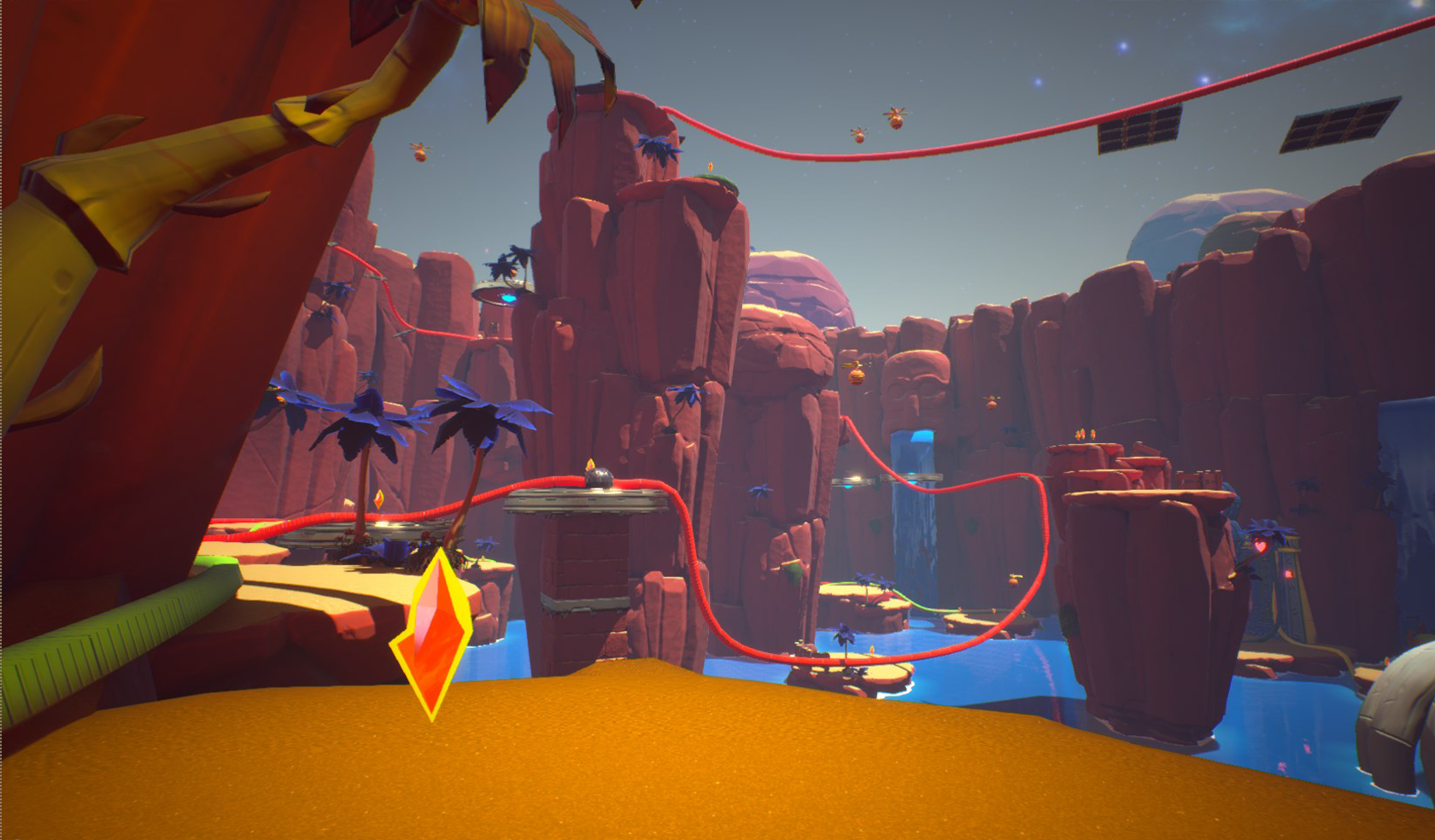 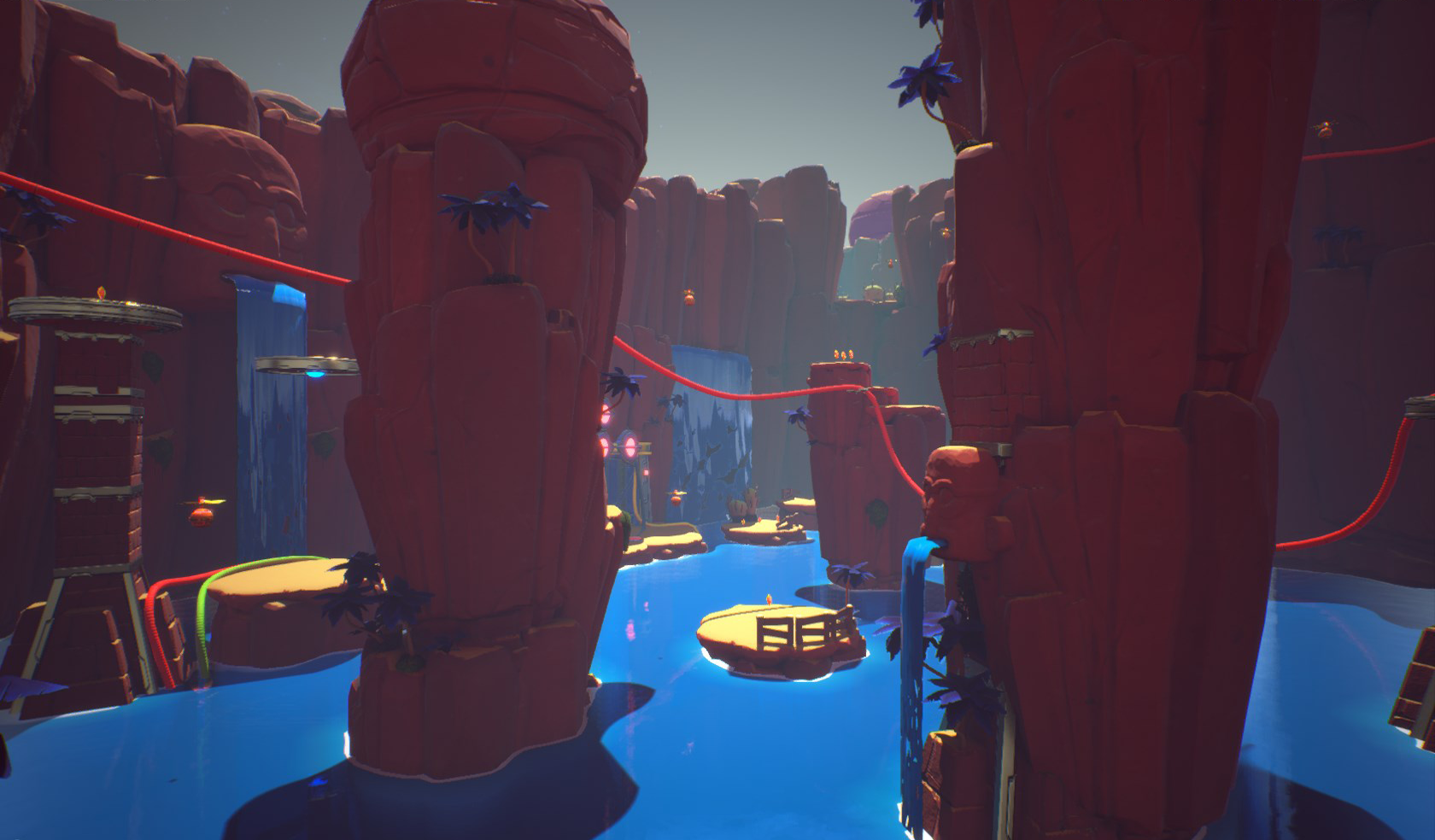 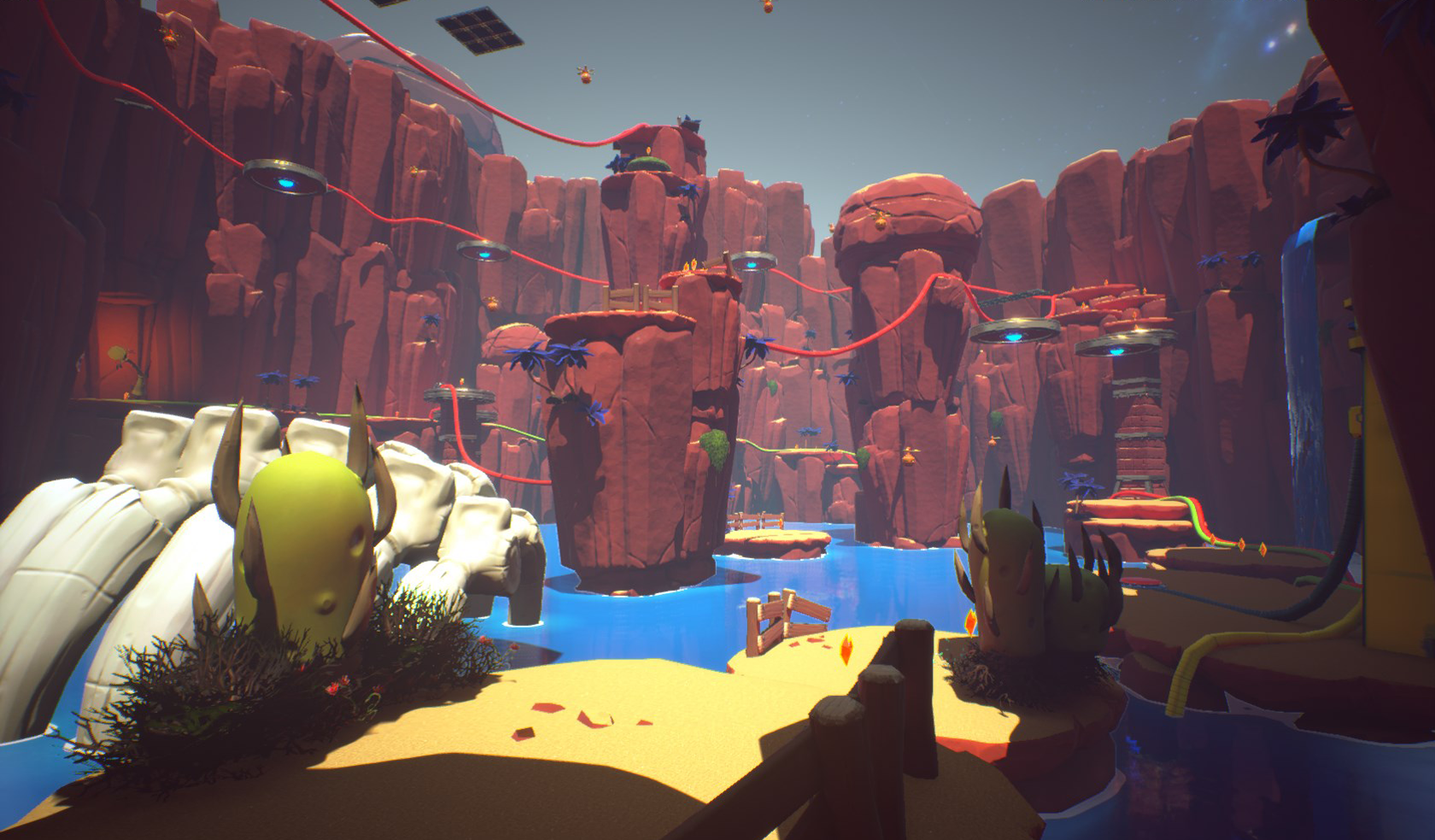 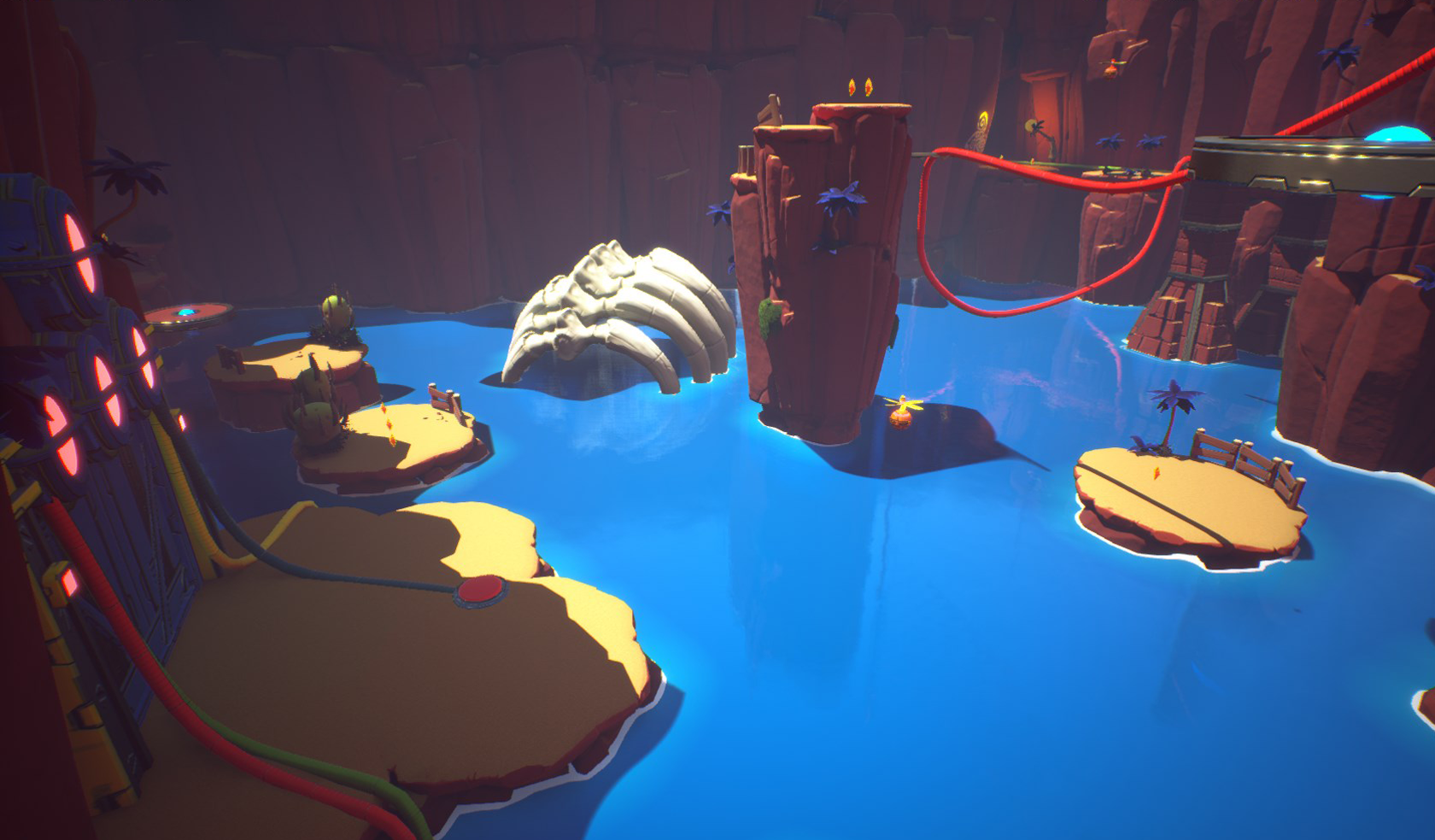 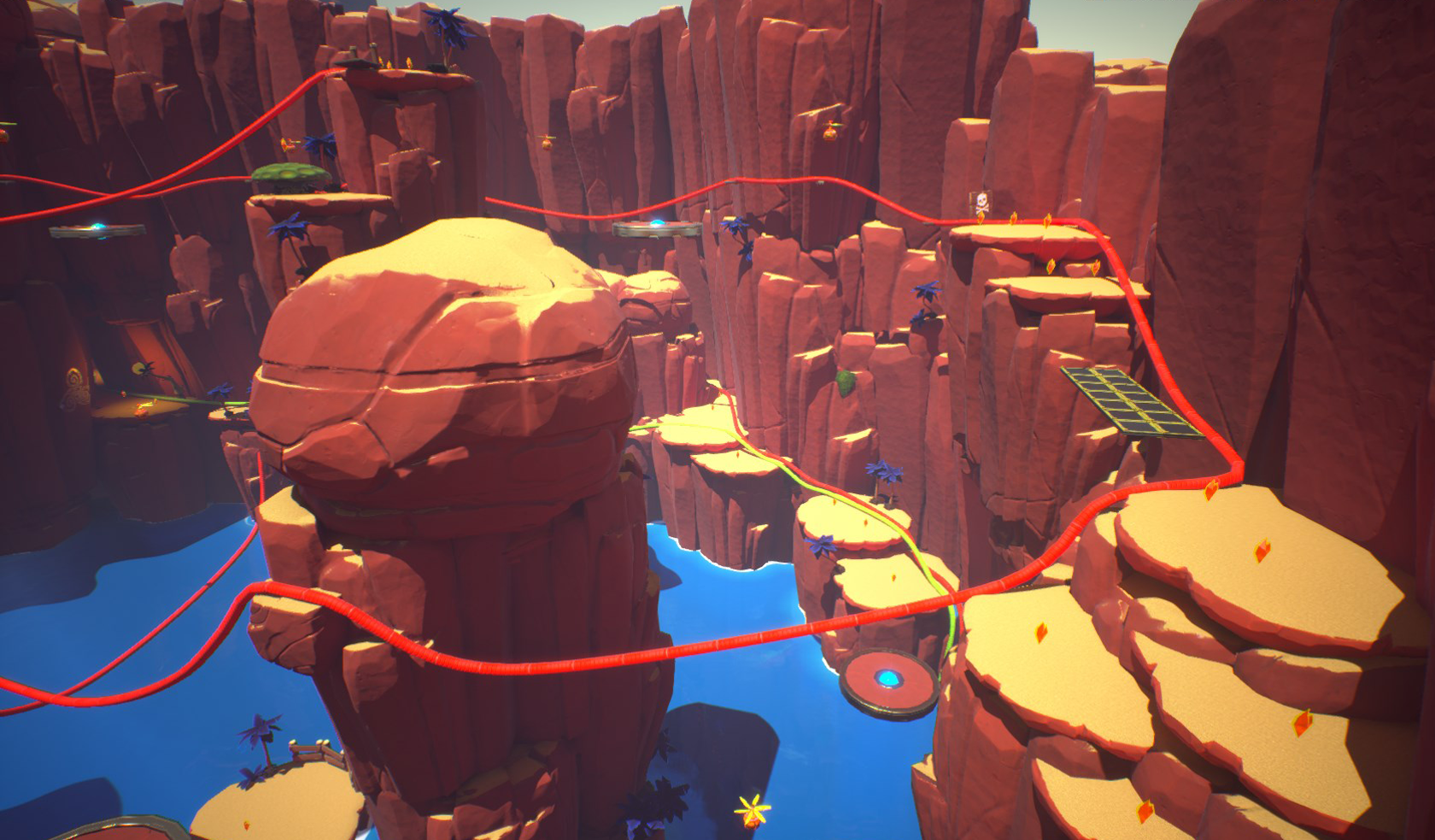 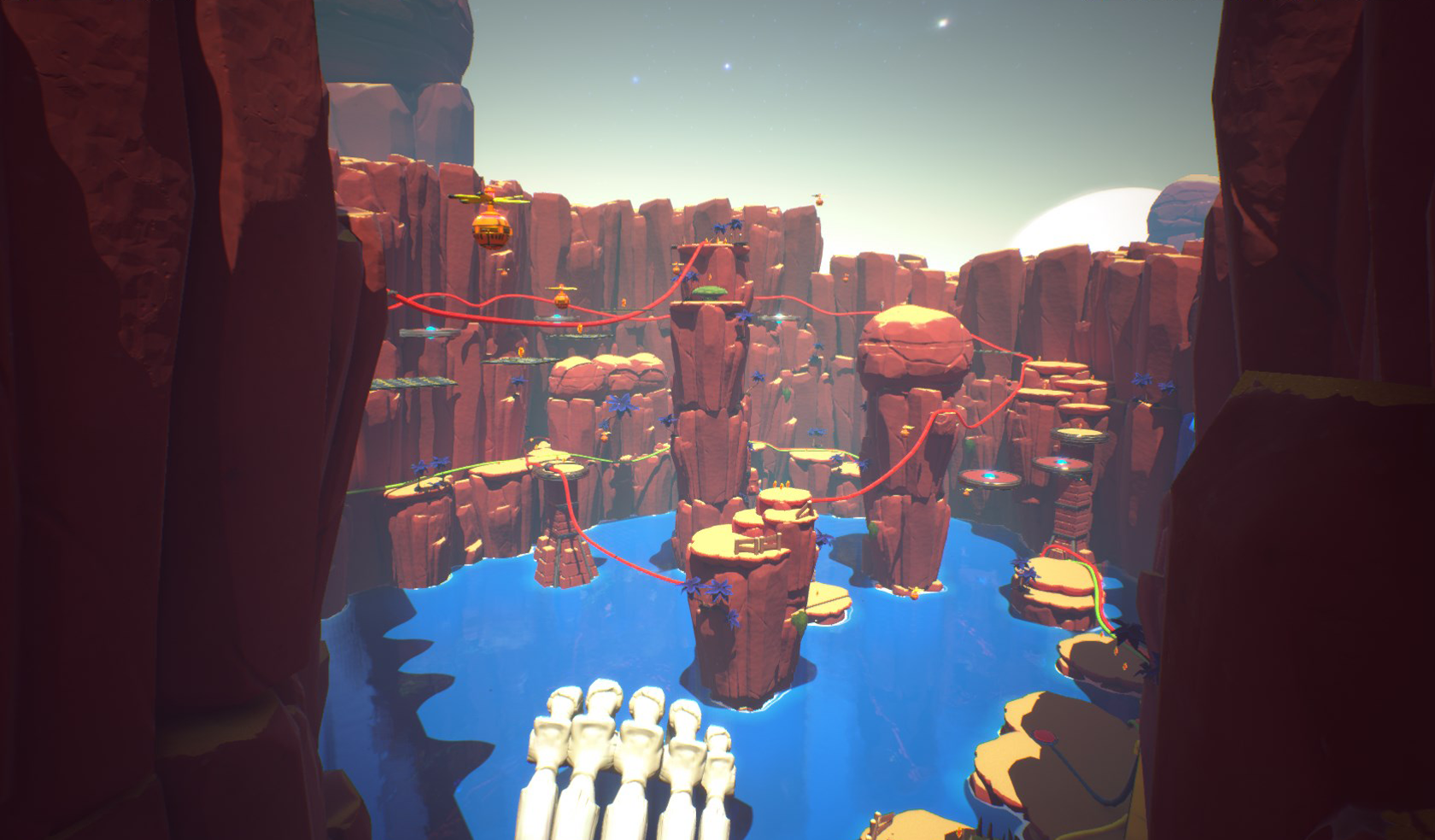 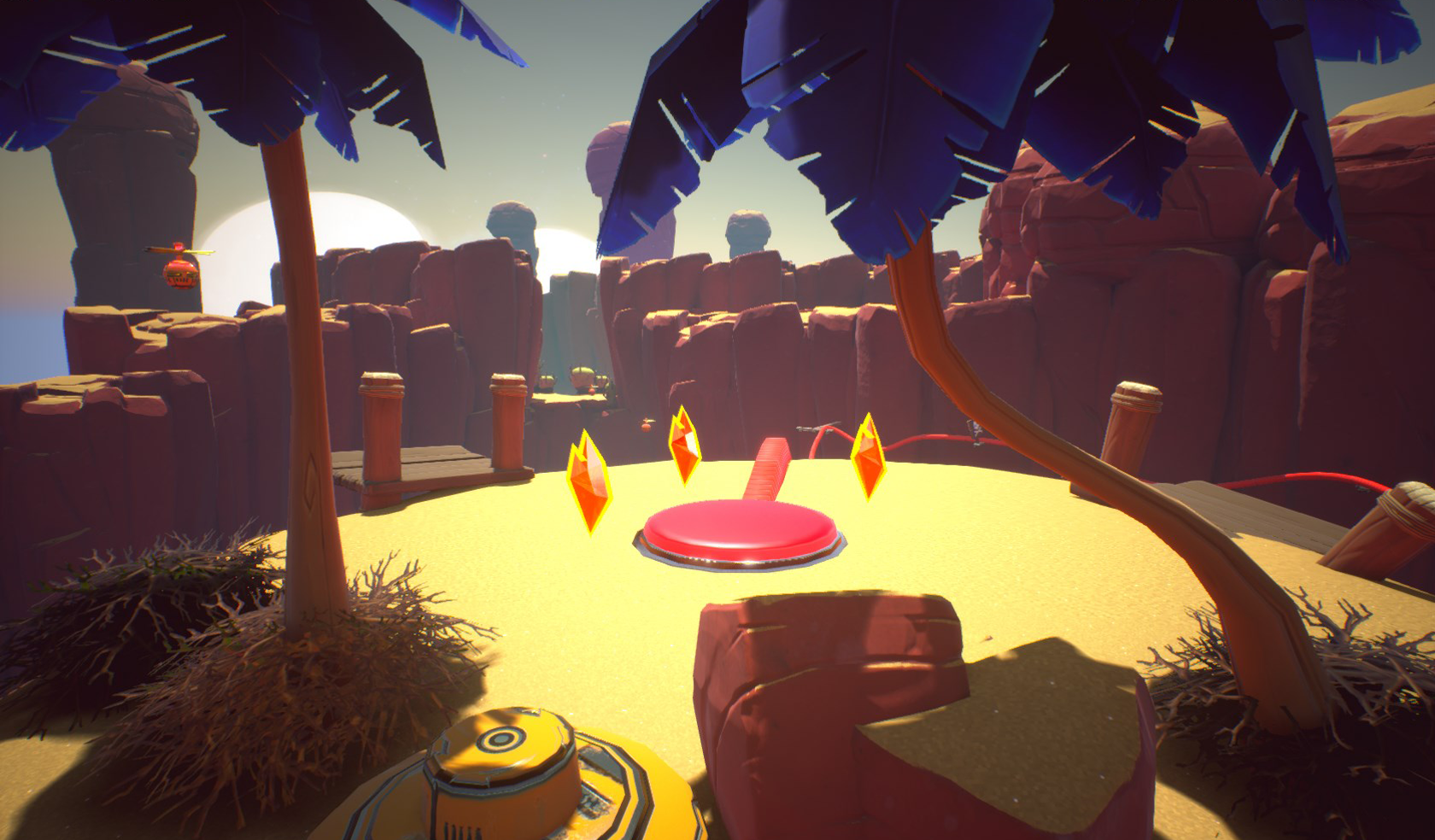 The player starts in the center The Oasis and the end goal is visible right in front of them. To get to the first button the player simply has to jump from the starting island to the one in front. The player steps on the button and one of the lights on the door turns from red to green. The player will also see that the button is connected to the door with a cable and that there are three more cables. The player now understands the connection: cable leads to button, three more buttons open door. Now the player has a choice: follow the green and red cable to the left or the yellow one to the right.

By following the red line the player will arrive at the button located in this area, The Oasis. Following the red cable right from the start will take the player on an upward spiral along side the walls of the Oasis until they reach the top of one of the pillars. On the way the player will encounter some enemies and a lot of platforming challenges which requires all the abilities available in the game.

Compared to The Oasis which has water, plants and waterfalls, The Canyon is a dry almost desert like place. Instead of water there is quicksand on the bottom and there are no palm trees here but cactuses instead. To transition from The Oasis to The canyon in a nice way I also put some cactuses in The Oasis right next to the entrance to The Canyon. This helps the player orientate by showing where one area starts and the other one ends. 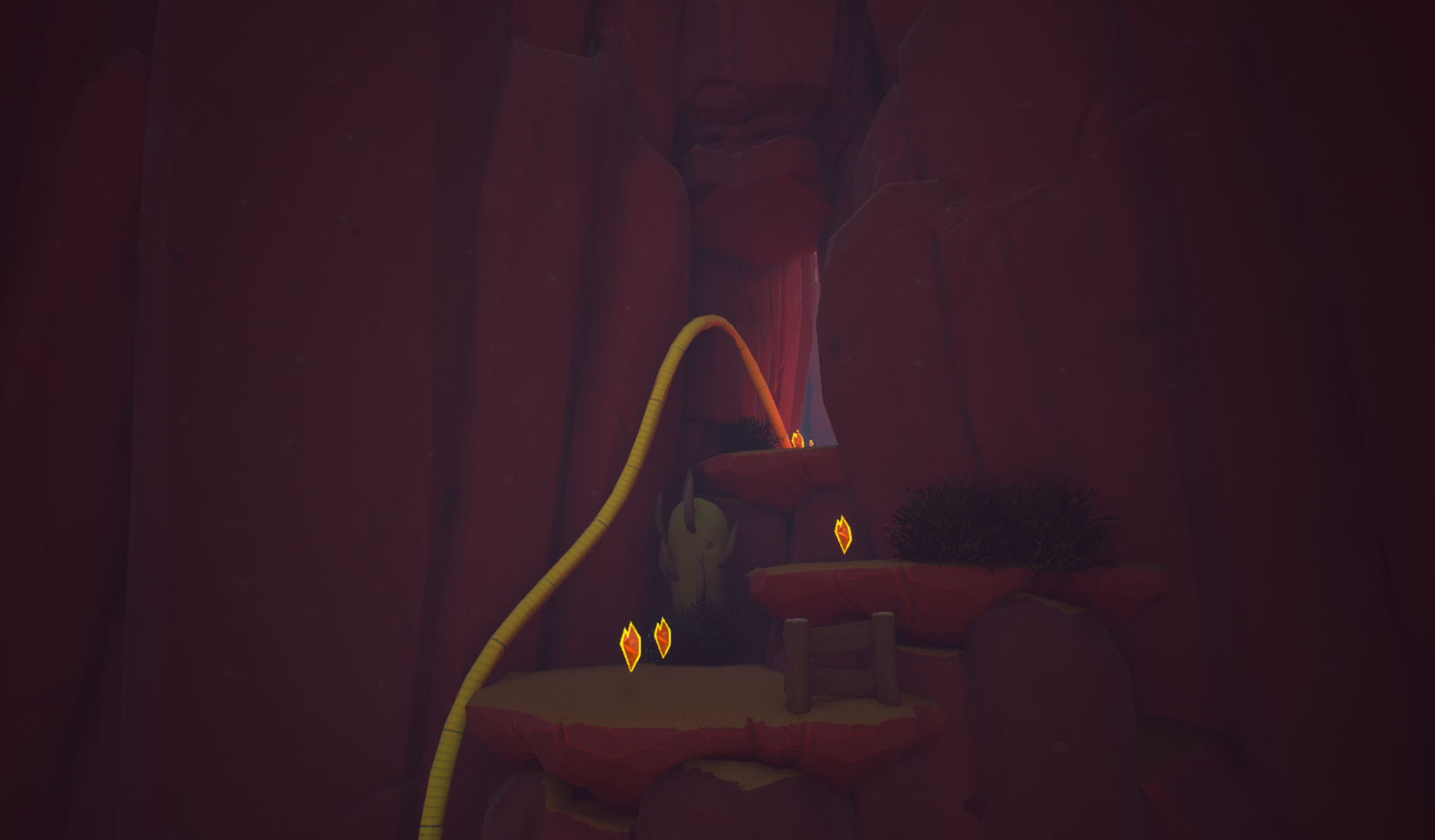 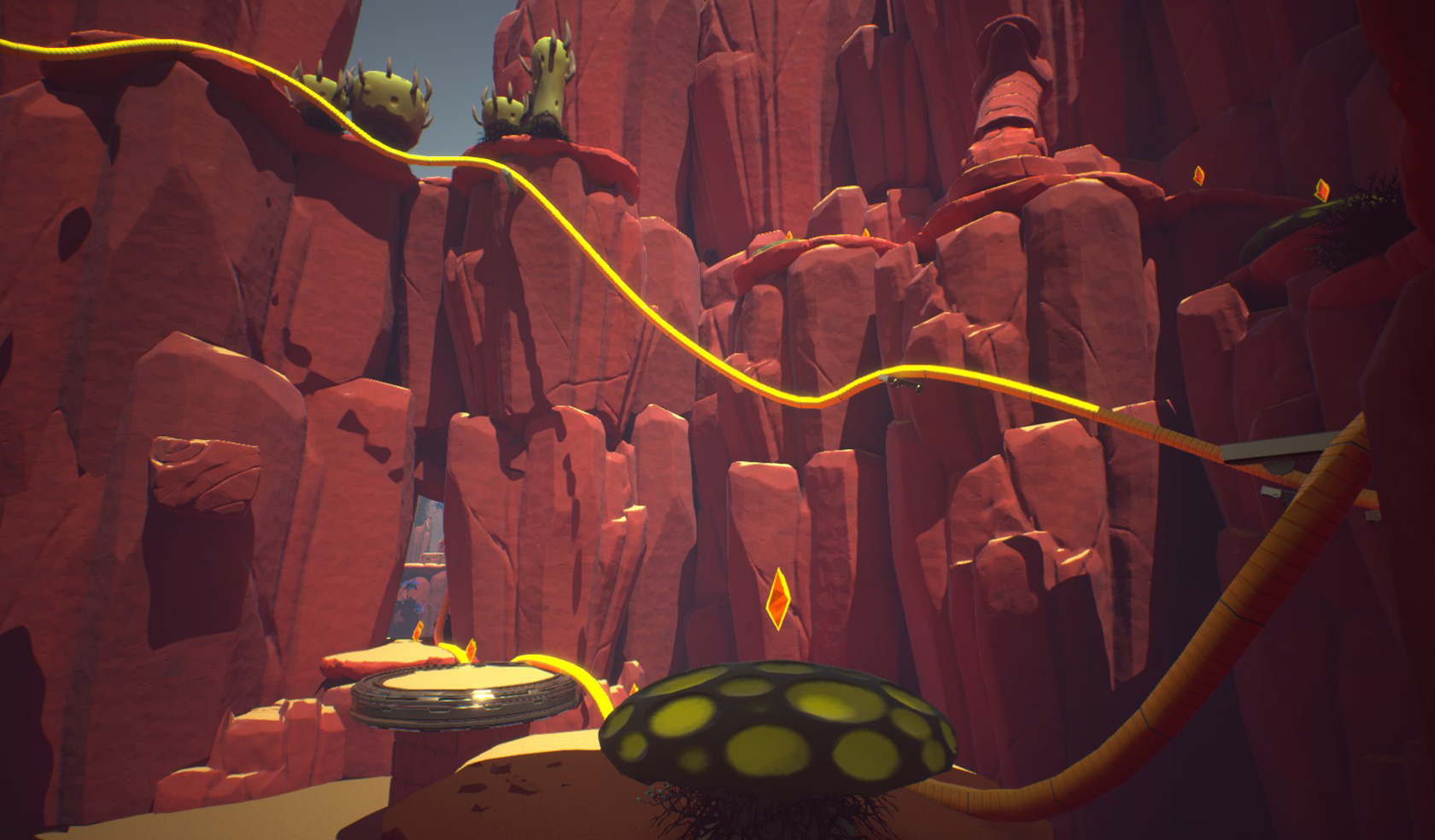 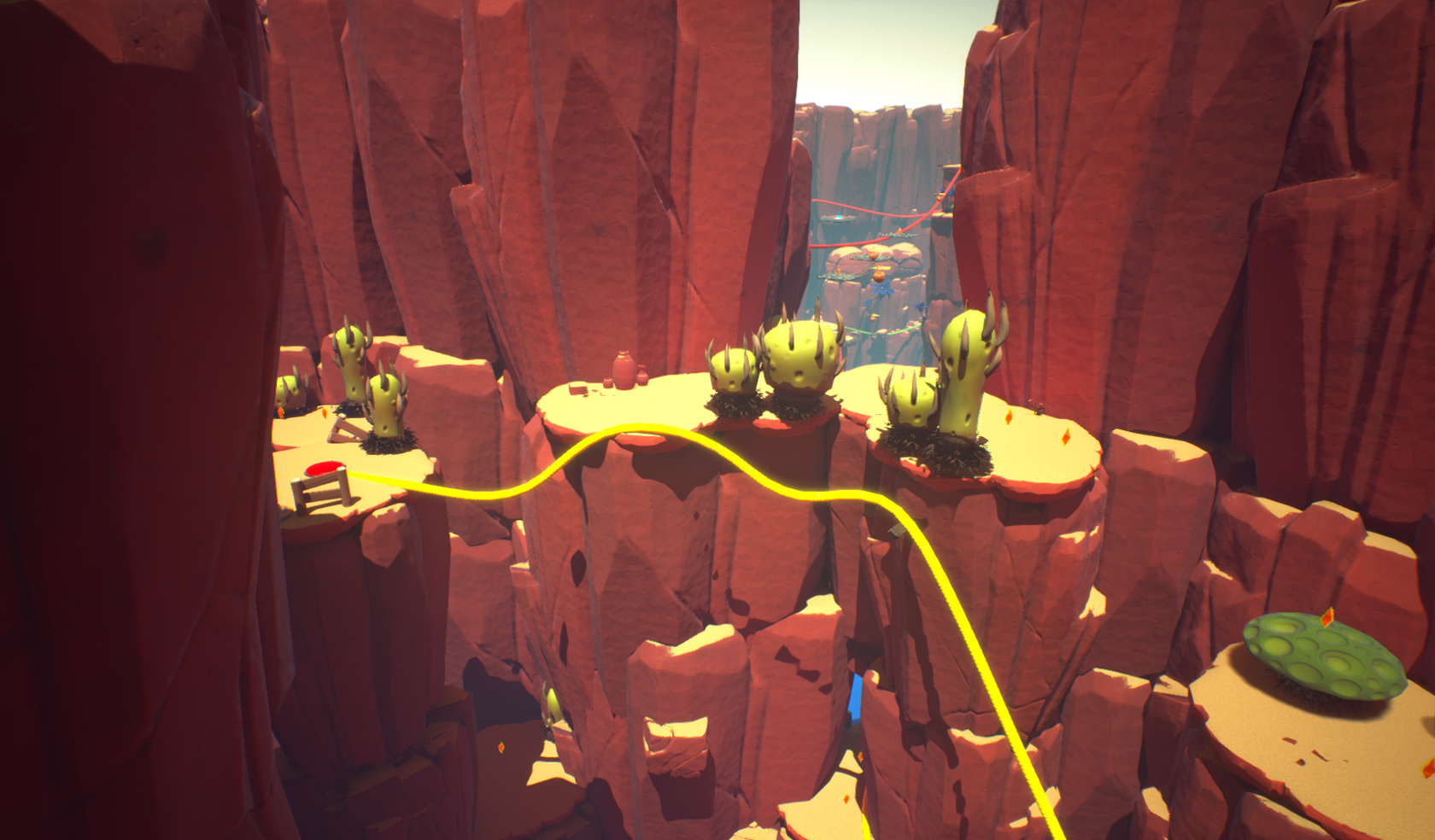 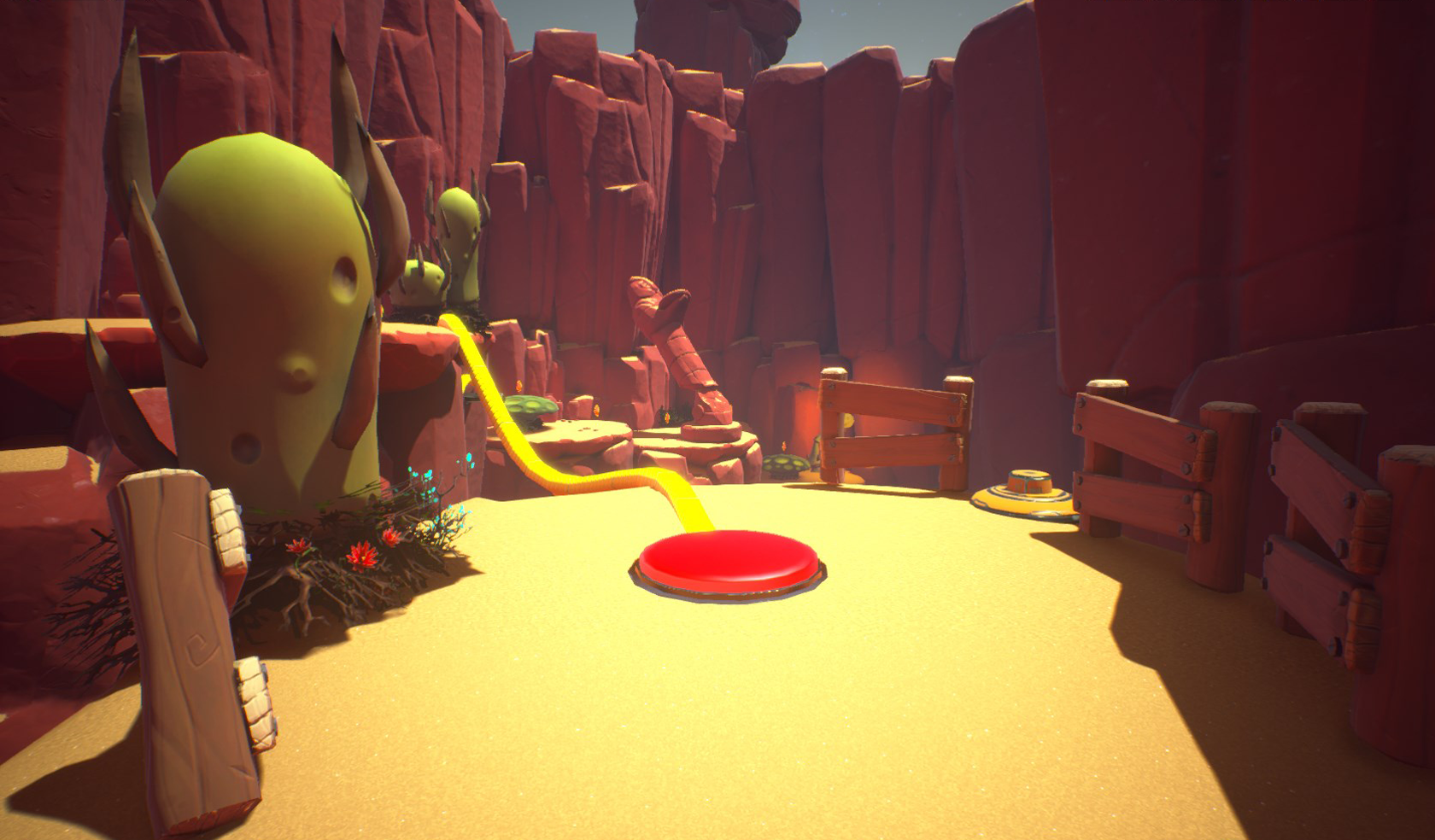 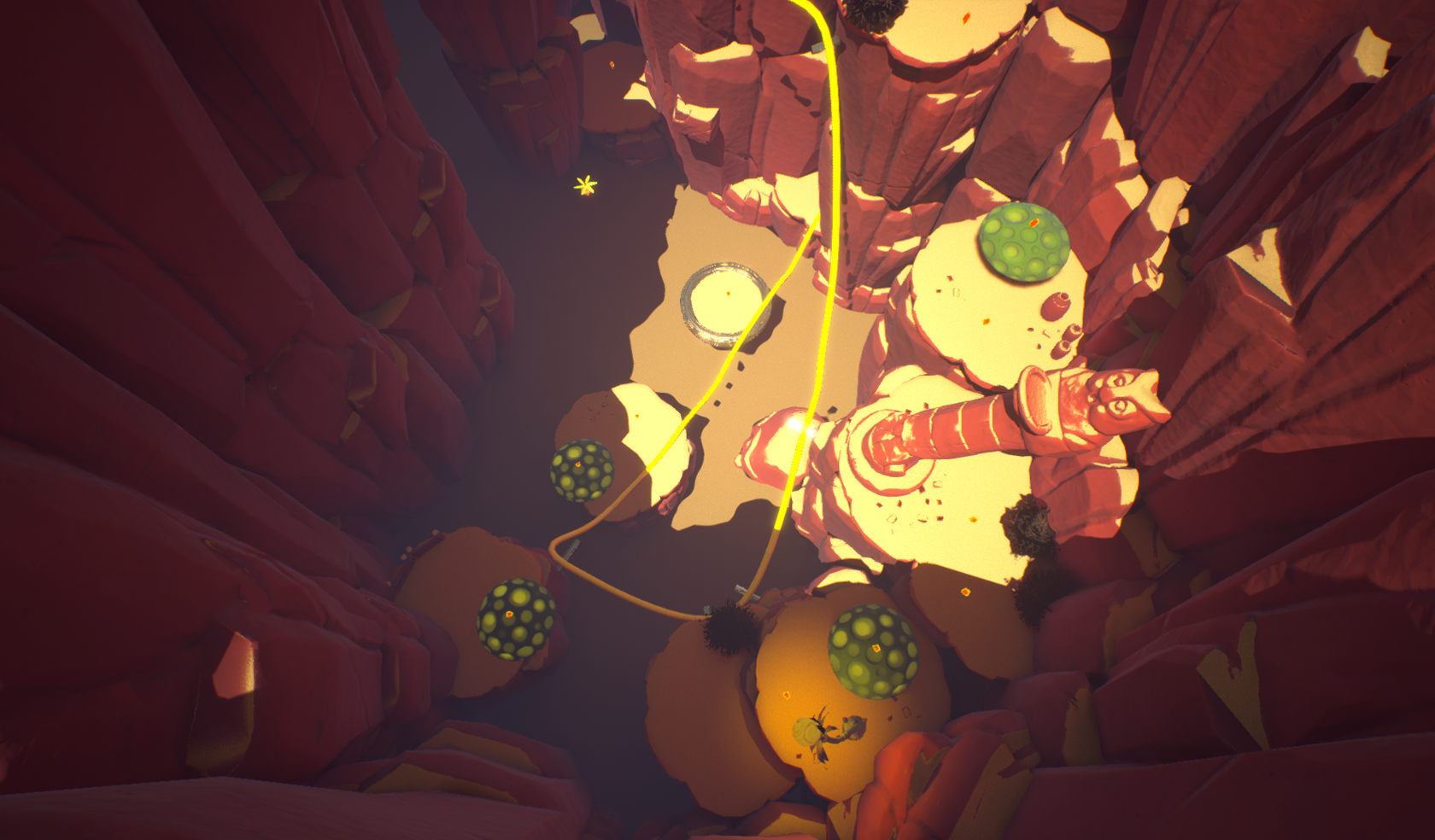 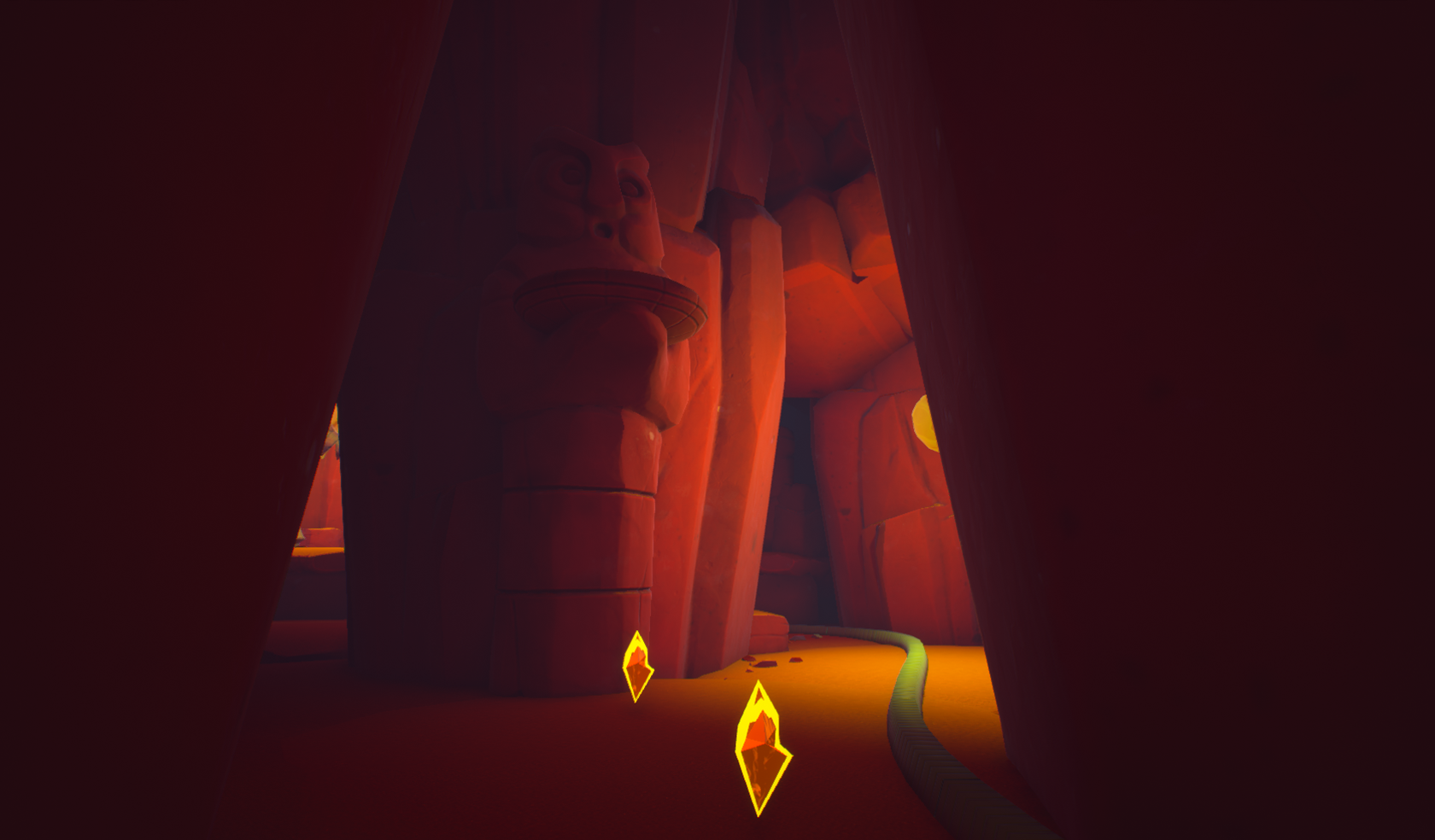 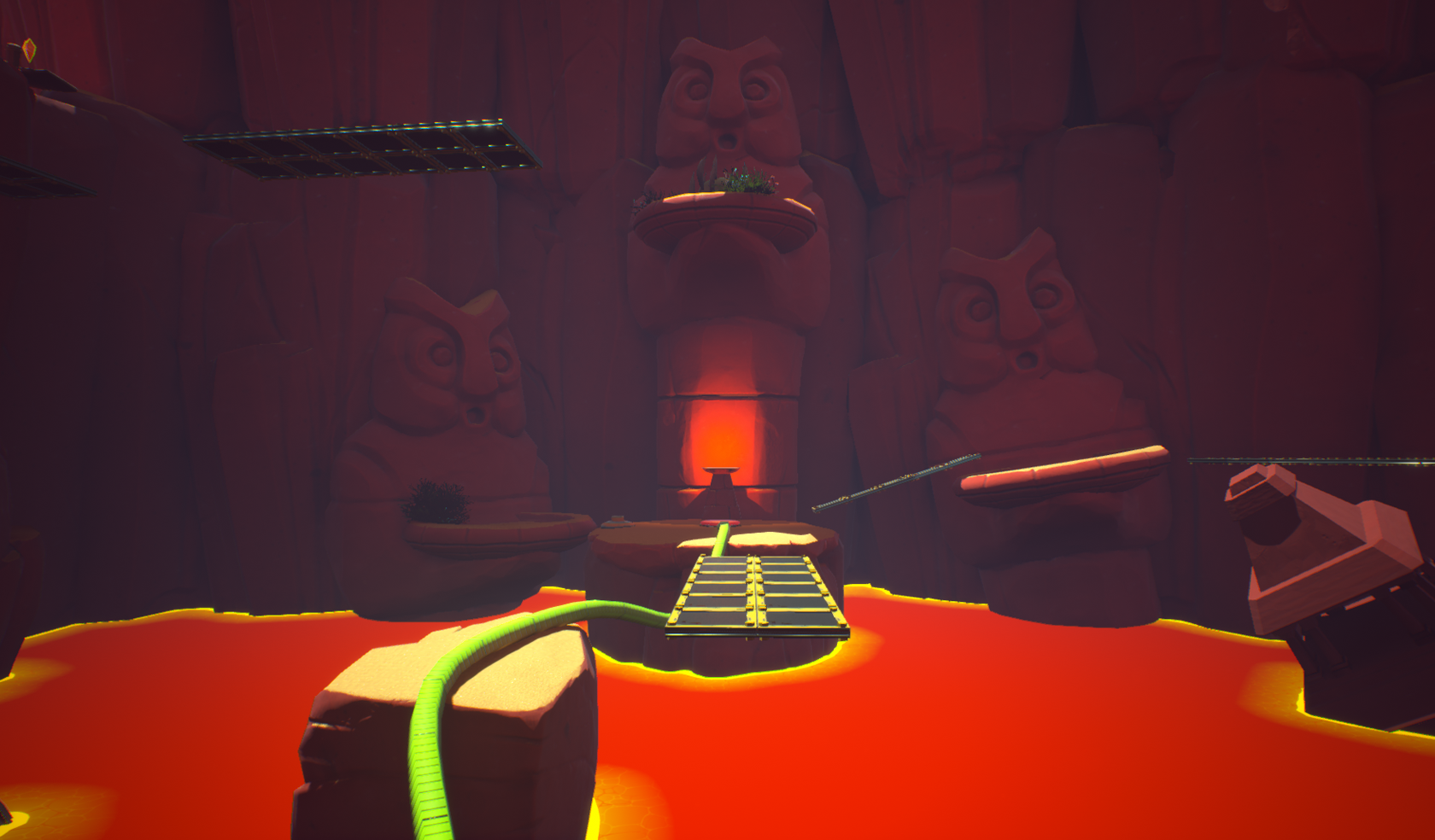 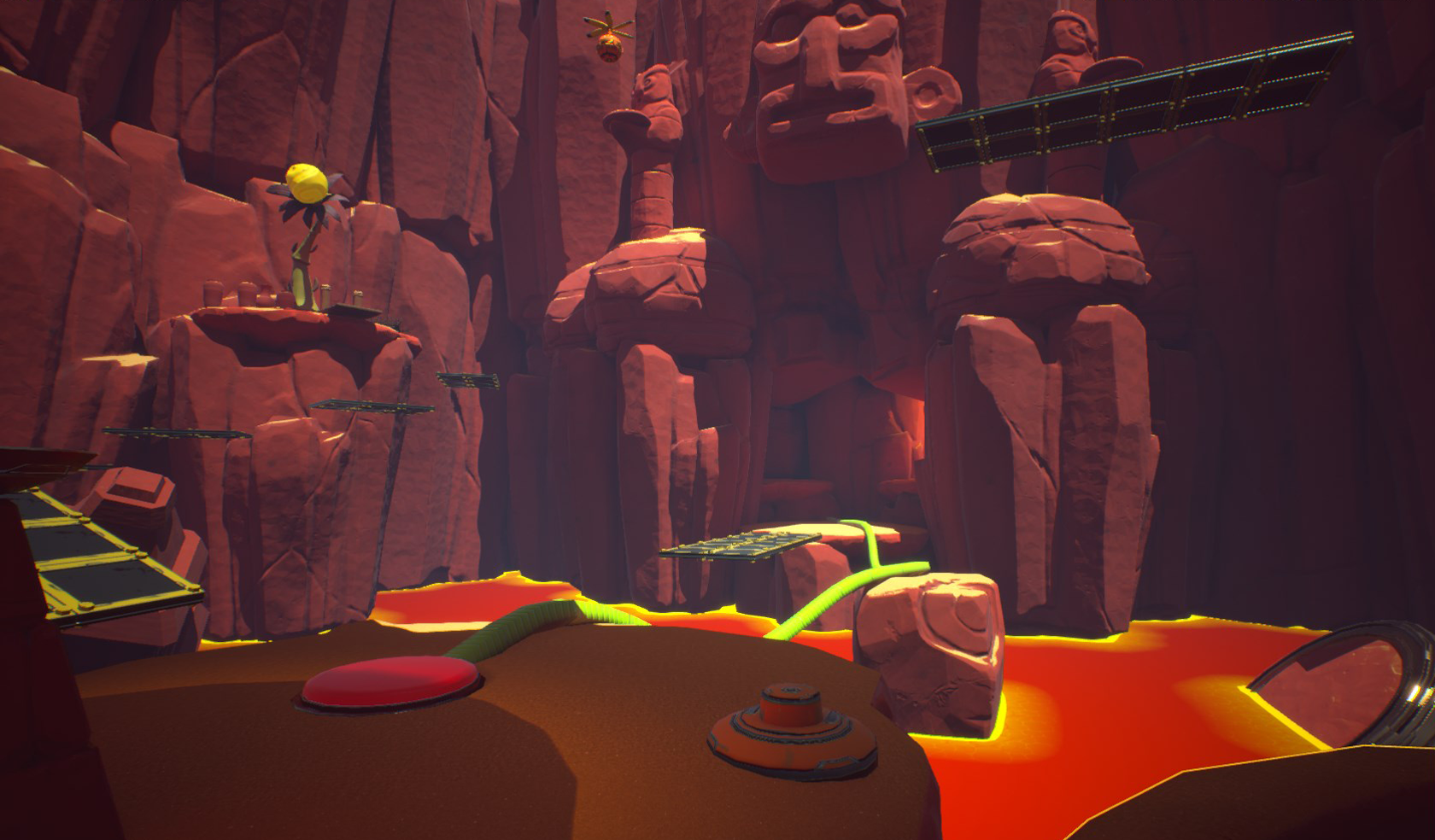 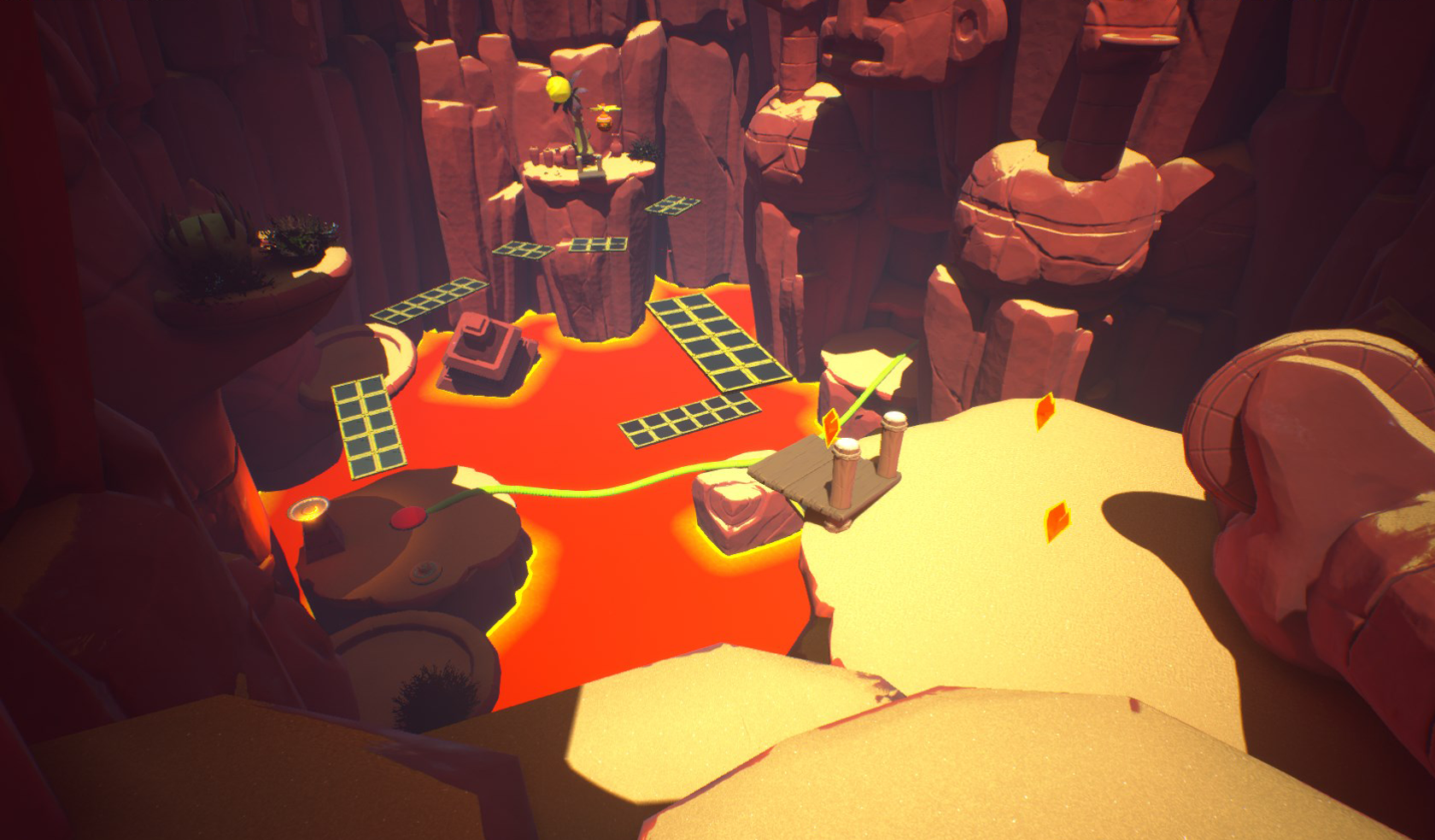 The green and red cable are placed side by side almost halfway to The Old Temple until they go separate ways. Getting to the button placed in The Old Temple by just following the cable is really straight forward except for one part where the way is blocked by rubble. But other than that it’s very easy. From here you can either turn back to The Oasis or take the connecting path which leads to The Canyon.

The Old Temple is exactly what it sounds like, an old temple. This area is filled with what looks like old structures from an ancient civilisation and just as old statues. Here we won’t find water nor quicksand, but lava. I also wanted to give the feeling like there has been people here excavating or something, therefore the area is filled with the magnetic platforms which requires the player to use the magnetic glove. Gives an interesting contrast between old and new, which can bee seen throughout the base game. 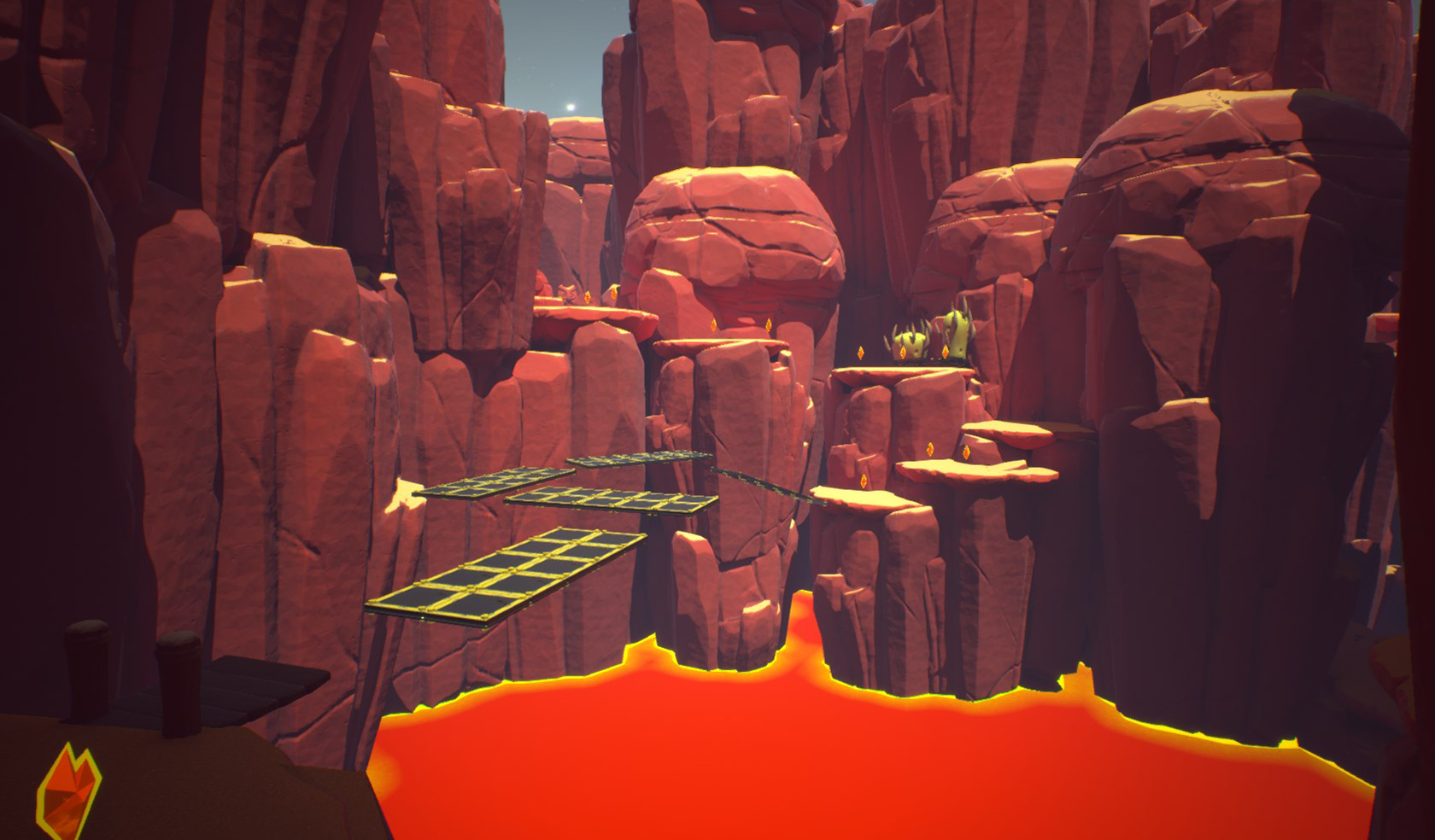 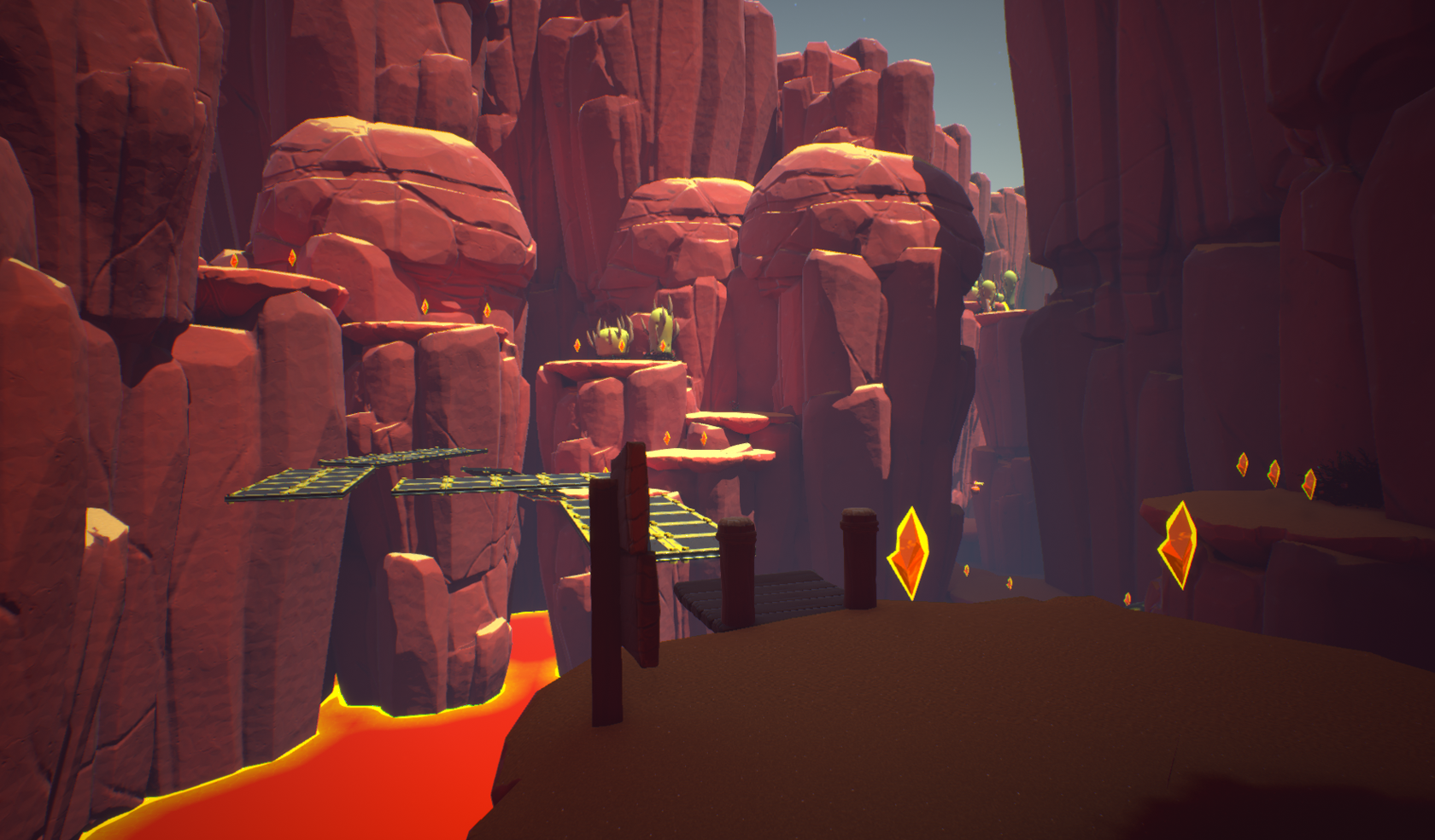 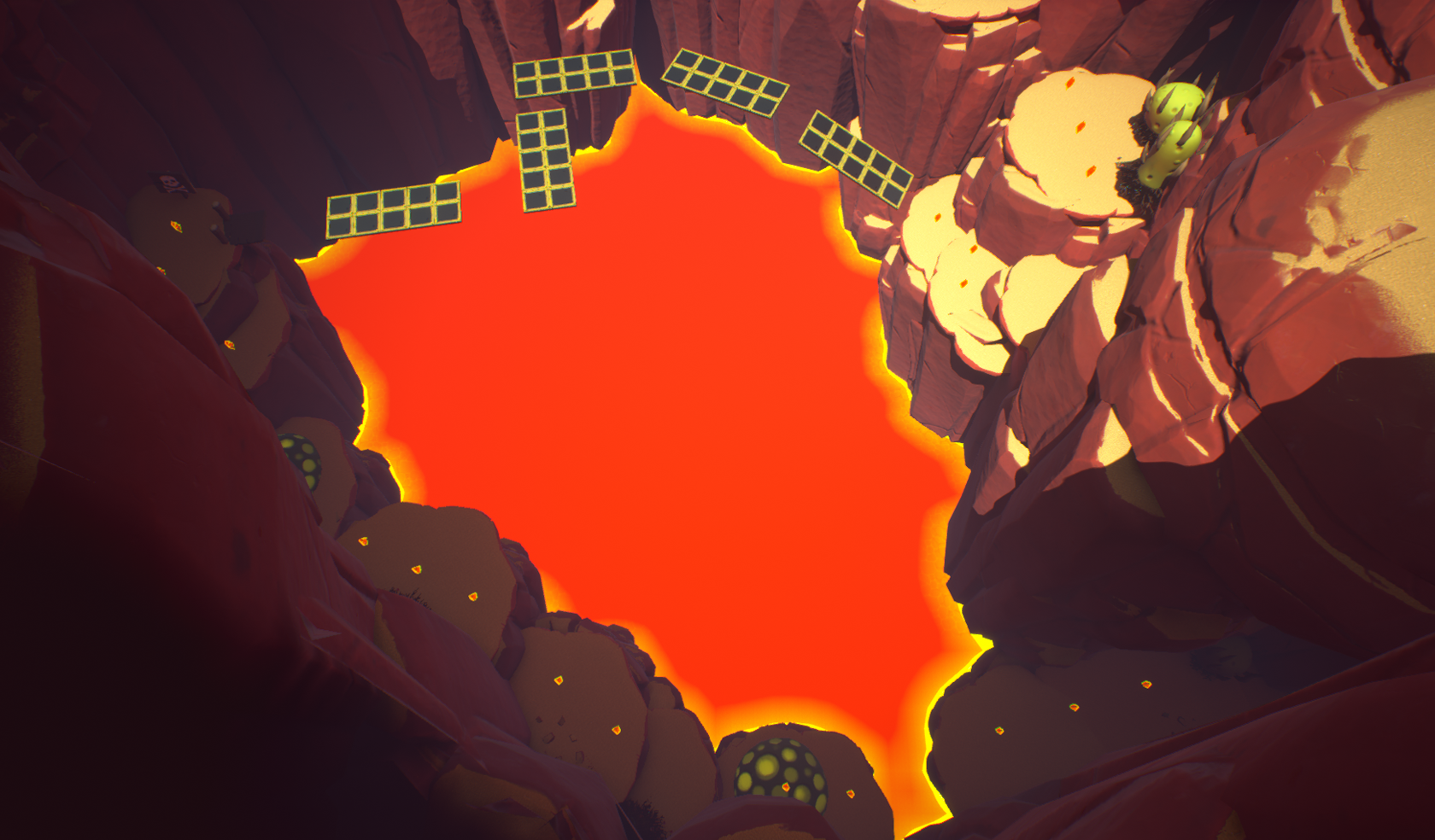 Here we have a short video showing how to get to each button as well as an example walkthrough to get an understanding of how the level is built. Please, enjoy!